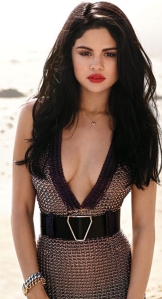 Taylor Swift’s upcoming music video Bad Blood would be premiering on Billboard today-and she did recently hint that her friend Selena Gomez along with al her best friends would star in that. She also released a poster of the video where Selena is seen showing her ample cleavage to the extent possible-and dresses in black, and this new image draws comparisons with her hot pose for the V Magazine she did some time back. Selene’s name in the video is “Arsyn” and looks like Taylor is getting all that is required to have her video be a success.

The video is all about female friendship-and one more image of the video has Taylor (Called as Catastrophe in the video)sporting a Katana sword and standing against her friend in similar attire.