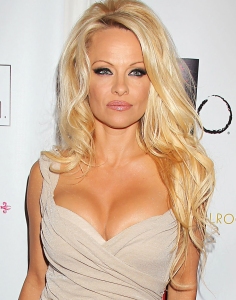 Pamela Anderson-a known supporter of Animal Rights, stripped for a campaign by PETA (People for Ethical Treatment for Animals). The campaign was for creating awareness on the amount of water being wasted by meat and dairy farms and urged viewers to go vegan if they really wanted to make a difference, and just not go slow on using water in their shower baths.

The poster says that meat and dairy farms use about 1/3 of the world’s water supplies and this image has Pamela naked in a pose that is similar to one in the movie Psycho by the king of horror films Alfred Hitchcock.

Pamela had also recently written to the Kerala State Government in India for banning the use of elephants in a very popular religious procession, though her views were not considered and she had a heavy outrage against her in social media.