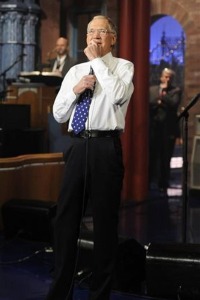 David Letterman’s popular midnight talk show Late Show had its final episode on Wednesday night, bringing curtains down on the memorable talk show which started way back in 1992. The final show was touch of overpowering emotions, as the host spoke of the love and accolades he received and was at times at his usual chirpy and witty self.

The show had clips from most of the celebrities that he hosted on his show such as Andy Kaufman, Barbara Walters etc, and also featured famous clips that quoted historical exists, such as the one in which Gerald Ford says that ”Our worst nightmare is over” (In an intended reference to his show here).

Late Show with David Letterman ran a total of 6,000 plus episodes and had Jay Leno’s Tonight Show as a competition.