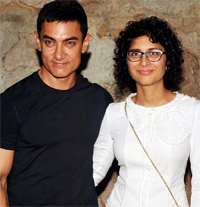 After supporting the makers of ‘Ship of Theseus’, Aamir Khan and Kiran Rao are supporting yet another filmmaker. Both of them are organizing a special screening of a documentary, ‘After my Garden Grows’. It clearly shows that both of them have a very good taste of films.
This documentary is directed by Megan Mylan who is an Oscar winning filmmaker. He got the Oscar for ‘Smile Pinky’. Kiran has planned a special screening of his current documentary, ‘After My Garden Grows’ on 15th November at her home which would be followed by a dinner. She has seen the documentary and is very impressed by it.
She wants many people from the industry to be aware of such meaningful cinema. In this attempt, Kiran and her husband Aamir is organizing a special screening of this film for all of their friends from the industry.