Just when we had rumors that Kim and Kanye were going strong and planning a second child, seems that Kanye’s recent performance in the Billboards award ceremony was a big disaster, and the rapper blames Kim’s half-sisters Kendall and Kylie for that. Seems that the audience didn’t like them both introducing the senior rapper on stage, and they even fumbled doing that with the audience being very vocal about their disapproval. Just when Kanye could get over with it, there was an issue with the pyrotechnics in the show, causing his performance to be somewhat out of sync against what he planned.

Owing to the enormous backlash he faced online, seems Kanye is looking to end things with Kim, though this could just be a rumor. Kim on her part had no control about the whole incident and seems that Kanye’s supporters have started drifting away from him on account of Kim.

Kendall Jenner had been quite for very long but now she decided to speak and tell the world that she accepts her father Bruce Jenner’s decision to become a woman.
The ‘Keeping Up with the Kardashians’ starlet said to US Weekly, “I love my dad. He’s always been there for me and my sisters. He’s a wonderful man. And just because he’s changing shoes now, so to speak, doesn’t make him less wonderful. I will always love my dad, whether he’s a man or a woman.”
She also talked about what is that thing which frustrates her. She said, “When people say we don’t work hard. That’s just the biggest lie ever. All of our family members are super dedicated to their work, and we all know how to commit ourselves to our jobs. It’s a great quality to have, I think. A good work ethic goes a long way.”

Kendall Jenner is progressing day by day and now it is speculated that she is bound with the contract for Calvin Klein Underwear.
The ‘Keeping Up with the Kardashiand’ starlet has now become very experienced in modeling as he did for brands like Marc Jobs, Diane von Furstenberg, Balmain, Chanel and Fendi and now she is all ready to become the new face for Calvin Klein campaign.
In the past few years, Kendall has posted many pictures in which she is featured while wearing Galvin Klein Undergarments. Sources say that the deal is almost confirmed. 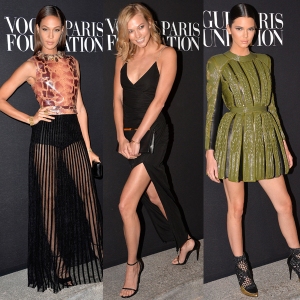 Kendall Jenner, Karlie Kloss and Joan Smalls who took the Fendi catwalk by storm and continues to rein their runway for the label’s Fall 2015 presentation at Milan Fashion Week.
Wearing 1970s-inspired brown and black puffy coats and long, fur-trimmed skirts the top models worked it in a retro-chic show. To complete their look, they donned leather headbands in their beehive-style ponies and accentuated their piercing eyes with cat-like liner and heavy mascara.
Karlie took to her Instagram to share her excitement for the Italian fashion show after the event. She posted, “Ciao Milano! What better way to kick off Milan Fashion Week than walking in the @Fendi show this morning with my friends @joansmalls @kendalljenner @doutzen.”

The supermodel Kendall Jenner who is already taking over as Milan Fashion Week has barely begun.
Arrived at the Italian fashion capital and kept a low profile. She was spotted in a sleek, sporty ensemble with her head down and her hands covering her face when she made her way through the terminal.
Earlier that day, Kendall posted a flawless selfie to Instagram. She captioned the photo as, “ask and you shall receive. Selfie for all 20 mill of you thanks for all the love”.

The Mercedes-Benz New York Fashion Week  is once again exciting for Kendall Jenner as she worked for the entire with two biggies of the fashion world.
On February 14, Saturday, the Keeping Up with the Kardashians” beauty got indulged wholly in the designer look for Alexander Wang’s show at Pier 94 in Manhattan. And yesterday she did modeling for Diane Von Furstenberg’s collection. She was seen in many different looks.
Last week, Jenner was present at the amfAR gala 2015 where she gave a clue about being present at the NYFW. She said, “I’ve got a lot and you’ll just have to see. I’m really excited, though. It’s really crazy. It’s been a year since I first started so it’s really exciting.”

Kendall Jenner who already has a slew of big successes to her credit but isn’t immune to the typical 19-year-old girl insecurities.
The “Keeping Up with the Kardashians” starlet explained in her March 2015 cover story for Allure magazine that she had to navigate the rough waters of fame while learning how to be a teenager.
Kendall said, “I had just started ninth grade when I got my acne. And I had braces. I wouldn’t look people in the eye. It was not a good time for me — it just killed my self-esteem. I thought when I didn’t look at someone, they couldn’t see my face.”
She also added, “I still have a hard time looking at someone when I’m talking to them, and I get nervous. When I started getting in front of the camera a lot, I think my confidence started to come out. It took a minute, because I had to believe in myself.”