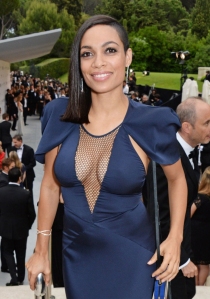 Rosario Dawson is beautiful and she is perfect as a model which she proved as she posed for The Oprah magazine’s April 2015 issue.

The ‘Josie and the Pussycats’ actress wore clothes from brand like Oscar de la Renta, Christian Siriano, Cameo and Alice + Olivia by Stacey Bendet. She looked beautiful as she is captured in the camera by Lorenzo Agius.

After the photo shoot Rosario proudly said, “I love the whole ‘Havana Nights’ theme of the shoot. I had great old Spanish music playing on my iPod. It was a mix from Mathew Schreyer – he’s a DJ and my ex-boyfriend, and he’s got good taste.”

She revealed that fashion runs in her blood, “My grandmother had a really great way with mixing patterns and colors. It all looked so good with her beautiful white hair and dark skin.”